The first playoff semi-final will feature the ISL’s team champions from the past two seasons, with Energy Standard winning the team trophy in Season One, and the Cali Condors taking the team title in Season Two. Joining them will be the DC Trident and Iron.

Several of the world’s biggest stars will be out for the ISL’s top two teams, including World Record holders Sarah Sjostrom and Ilya Shymanovich competing for Energy Standard and Lilly King leading the charge for the Condors. Also joining the fray will be several of Great Britain’s top swimmers who all opted out of last week’s European Short Course Championships, i

ncluding James Guy, Anna Hopkin and Bren Proud. Beata Nelson, who was a breakout star for the Cali Condors in her rookie season last year, will join King in seeking to help the Condors defend their ISL title.

American Kelsi Dahlia led wire to wire in the women’s 100 fly to take the upset victory over World Record holder Sarah Sjostrom in 55.45. Sjostrom touched second in 56.22, off her time from last week’s SC Euro’s. That is Dahlia’s fourth win in the event this season and her 7th overall in the ISL

Erika Brown touched in third in 56.56 to secure a 1-3 finish for the Condors, raking in big points early in the meet. Notably, she just outtouched her University of Tennessee training partner, Madeline Banic, who finished fourth for Energy Standard in 56.84. As projected, early returns suggest this meet will be a battle between Energy Standard and Condors. 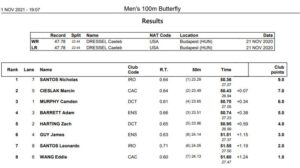 Nicolas Santos took home the win for Iron in 50.36, his first-ever ISL win in the 100 fly, though he has been dominant in the 50 fly, winning the shortest fly event 9 times in his ISL career. Following close behind was the Condors’ Marcin Cieslak in 50.43, while American Camden Murphy touched in third for the DC Trident in 50.70.

Energy Standard feels a huge hole in their lineup without star flyer Chad Le Clos. ENS will have to settle for a 4th from Adam Barrett and a 6th from James Guy. 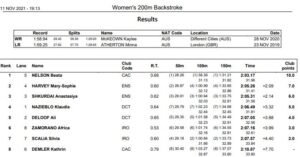 The Condors pick up another win in the women’s 200 back, courtesy of Beata Nelson‘s 2:03.17, but Energy Standard will score the most points following a 2-3 finish from Mary-Sophie Harvey and Anastasiya Shkurdai. Shkurdai had been swimming the 100 fly frequently during the season but moved out of the event today and it paid off big-time for the team race. It is small lineup changes like that from the coaching staffs will likely determine the outcome of the meet between the league’s two most competitive teams.

Despite Nelson’s win, the Condors will lose ground to ENS in the team point totals due to Kathrin Demler’s distant 8th place finish. 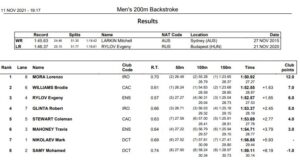 100 back World Record holder Coleman Stewart finished in 5th for the Condors. 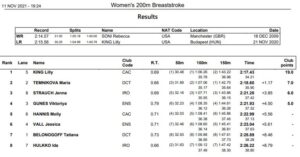 The Cali Condor women are on fire to start the meet, with Lilly King winning the 200 breast in 2:17.43. She remains undefeated on the season in both the 100 and 200 breast, with this being her 5th win in the 200 breast. DC Trident’s Maria Temnikova touched a second behind to take 2nd place in 2:21.28. 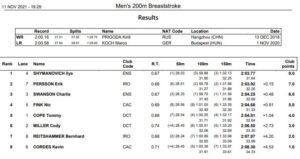 Energy Standard makes a big move in the men’s 200 breast, with Ilya Shymanovich and Charlie Swanson posting a 1-3 finish. Shymanovich, who is the World Record holder in the 50 and 100 breast, extended his range here to take the 200 breast by just .15 over Iron’s Erik Persson.

The Condors take a hit here, with their top finisher being Nic Fink in 4th place in 2:04.68. Kevin Cordes touched the wall for an 8th place finish, worth just 1 point for CAC. 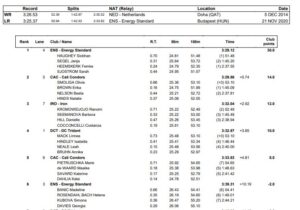 Energy Standard wins their first women’s event of the day, taking the 400 free relay by 7 tenths over the Condors. Energy Standard was led by a blistering 51.48 leadoff from Siobhan Haughey, which gave them the early lead that they never relinquished. Sarah Sjostrom anchored in 51.57 for Energy Standard’s A to seal the win.

The Condors’ A team finished in 2dn in 3:29.86. They were led by US Olmypian Erika Brown’s 2nd leg split of 51.99, joining Haughey and Sjostrom as the only other sub-52 splits in the field.

DC Trident’s A finished in fourth, notably without British sprinter Anna Hopkin, a huge blow for the Trident.

Justin Ress posted his third ISL 50 free win of the season for the Condors with a 21.04. Ress led a very tight field, with the top four swimmers all touching within .07 of each other. Thom de Boer of Iron and ENS’ Ben Proud rounded out the top three in 21.08 and 21.09, respectively.

Energy Standard’s Sarah Sjostrom returned just minutes after anchoring their winning 400 free relay to easily win the 50 free in 23.32. That stands as the second fastest time in the league this year, behind her own swim from the Naples stop in September.

Iron’s Ranomi Kromowidjojo touched second while swimming at home in 23.75, while DC Trident’s Anna Hopkin touched in third after not swimming on their 400 free relay.

The Condors take a hit in this event, with Erika Brown finishing 4th and Olivia Smoliga coming in 8th. Both swimmers were on CAC’s 2nd place 400 free relay just minutes ago. 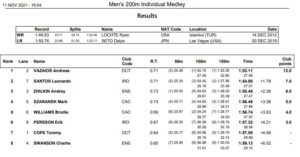 DC Trident picked up their first victory of day, courtesy of Andreas Vazaios’ 1:53.11 to win by over a second and half. The swim marks Vazaios’ 5th ISL victory of the season and comes less than a week after he took the SC Euro’s title in the event. Iron’s Leonardo Santos touched in second 1:54.89 to break up the Condor/Energy Standard hegemony.

CAC finished 4th and 5th in the event, with Mark Szaranek touching in 1:56.49 for 4th and Brodie Williams 1:56.74 for 5th. ENS collected 3rd place points from Andrew Zhilkin’s 1:55.49 and just one point from Charlie Swanson’s 8th place finish. 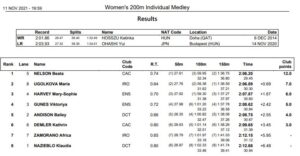 Cali Condors’ Beata Nelson picked up her second victory of the day, winning the 200 IM in 2:06.20. That is the University of Wisconsin alum’s first 200 IM victory of the season. Following close behind her was Iron’s Maria Ugolkova, who touched in 2:06.89.

Energy Standard picked up a 3-4 from from mary-Sophie Harvey and Viktoriya Gunes to help negate Nelson’s victory. Condors’ other entrant, Kathrin Demler finished 6th in 2:09.65.

ENS’ Ilya Shymanovich posted a mssive swim in the 50 breast to jackpot all swimmers outside of the top 3. The World Record holder blasted a 25.60 for the win and was followed by his teammate Felipe Lima who finished 2nd in 26.20. Cali’s Nic Fink was the only other swimmer to not get jackpotted, finishing 3rd in 26.36.

Cali’s women’s breaststroke group struck back with a 1-2 finish of their own, with Lilly King touching in 29.44 and Molly Hannis touching close behind in 29.53. King’s win was good enough to jackpot the 6th-8th place finishers and swing the momentum back in Cali’s favor.

Also notable was the inclusion of Siobhan Haughey for Energy Standard. Haughey is one of the best freestylers in the world, though the ENS coaches opted to use her in the 50 breast, which netted just a fourth place finish. 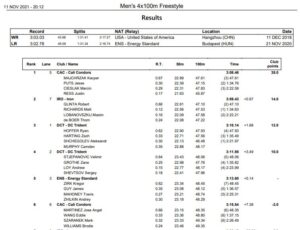 The momentum of the meet has now fully swung into Condors’ favor, after Energy Standard’s Evgeny Rylov false started on the second leg of their relay to DQ Energy Standard’s A team. The Condors took advatage with a huge anchor leg from Justin Ress, who posted a 45.87 to secure a come from behind win for CAC.

Ress’ swim was one of only two splits under 47 seconds, which gave the Condors an ace in the hole to take the victory. Iron was close behind in second in 3:09.43.

Energy Standard’s Simona Kubova and Cali Condors’ Maaike de Waard tied for the victory in the women’s 50 back, stopping the clock in 26.55 and will split the points for their teams. DC Trident’s Ali Deloof touched third in 26.69, while Condor’s Oliva Smoliga swam her third race of the day and touched fourth in 26.78

Energy Standard’s Kliment Kolesnikov won the men’s 50 back in 22.94, though was well off his lifetime best of 22.47, which he posted just last week at the SC Euro’s Iron’s Guilherme Basseto and Trident’s Mark Nikolaev were close in pursuit, finising in 23.01 and 23.03, respectively.

The event was tough for the Condors, where 100 back World Record holder Colemand Steward finished just 4th in 23.27, and Mark Szaranek finished in 8th in 26.09. Szaranek’s swim results in a -1 score for CAC due to his time. 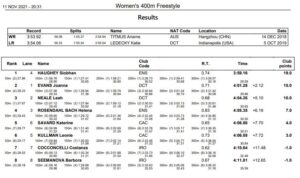 Energy Standard’s Siobhan Haughey jumped out to the early lead in the women’s 400 free, grabbing the bonus six points at the 100m-checkpoint.

Haughey, who was just minutes out of placing fourth in the 50 breaststroke, extended her lead from there, ultimately winning easily in a time of 3:59.16—her fastest swim of the season. Haughey had previously been 4:00.23 this season, and has now won the event four times. Toronto’s Summer McIntosh (3:58.78) remains the fastest swimmer in the ISL this year.

Haughey ended up jackpotting both of Iron’s swimmers, scoring a total of 19 points for the event. 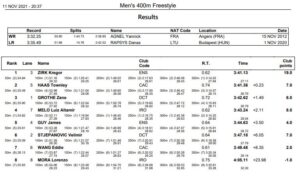 ENergy Standard’s Kregor Zirk won the men’s 400 free in 3:41.13, which set a new Estonian Record in the process. Zirk was out quick, taking the 100 split points, though surrendered the lead to Iron’s Luiz Melo at the 200 split before taking it back at the 300 and never relinquishing the lead.

Cali Condors’ Townley Hass touched in 2nd after a strong back half. Haas closed in a blistering 26.79 to nearly run down the Estonian leader. DC Trident’s Zane Grothe touched in third after moving up from 5th place at the halfway point.

Team scores after the men’s 400 free: 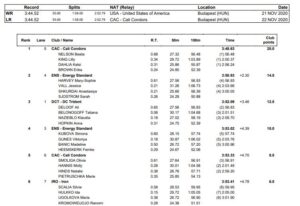 The Cali Condors took the win in the women’s 400 medley relay behind a massive 1:03.89 breaststroke split form Lilly King. Beata Nelson opened with a 56.48 to give the Condors a half second, then King split the race wide open and the Condors cruised to victory.

Energy Standard’s A came in second thanks to a blazing 50.88 anchor from Sarah Sjostrom. Sjostrom’s anchor was enough to overtake DC Trident’s Anna Hopkin for the second place finish. Hopkin, for her part, anchored in 52.39 for the third place DCT A team.

Energy Standard’s B finished in fourth, adding an additional 10 points to the team’s total. 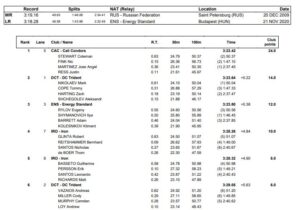 The final race of the day came down to the touch, with Cali Condors’ A team taking the win in 3:23.42. Anchor Justin Ress posted his second 45 split of the day to secure the win for CAC just outtouching DC Trident’s A and Energy Standard’s A.

DC Trident was the surprise second place finisher, after posting a 3:23.64. Backstroker Mark Nikoloaev had the field’s fastest leadoff split in 50.04, while Zach Harting posted the fastest 100 fly split in thje field with a 50.14.

Energy Standard finished just behind DC with a 3:23.80 and were led by Ilya Shymanovich‘s 55.89 breaststroke split and Kliment Kolesnikov’s 45.95 anchor.